I've never really plowed through to finish a project like this one before, but it does feel great to have this Row By Row quilt all done. It did take me longer than I planned to take photos. I just couldn't get the right lighting to get the quilting to show up on white fabric but I finally figured it out.
WARNING: This is photo heavy.
I am continuing with my free-motion quilting practice and with this quilt, it was the only way to go because of the 3-D pinwheel and the appliqués I had to work around. This dresden block was supposed to be a sunflower but I wanted to change it up and use different colors for the block. 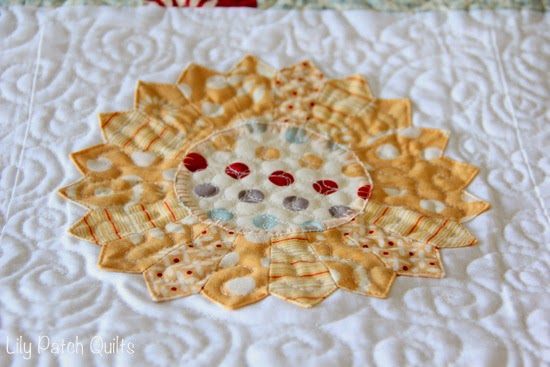 TA DA! The completed quilt. I wanted to make it useable and not hanging on my wall so I planned and sketched the layout to make these blocks fit together. 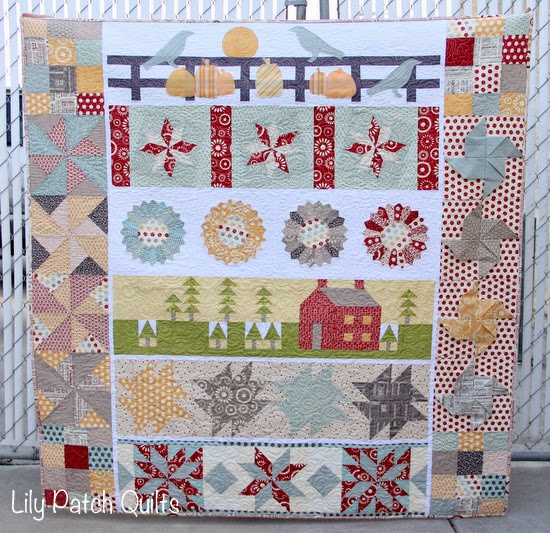 This was the first time that I've ever sewn a wonky block and it wouldn't have been so bad if the pattern was correct. I had to adjust the measurements and color placement was all wrong. I did contact the quilt shop to let them know so others wouldn't have any problems. 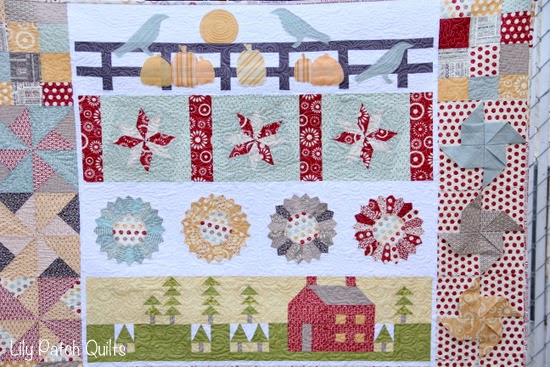 This was also my first time sewing the 3-D pinwheels. I do love the look of it but it was not an easy thing to quilt through the thickness so I left it alone and quilted around it. I think the 3-D pinwheel would look so fun in pillow form.
In order to show the quilting, I laid the quilt across my quilting machine and utilized the window's natural light as I took the photos. 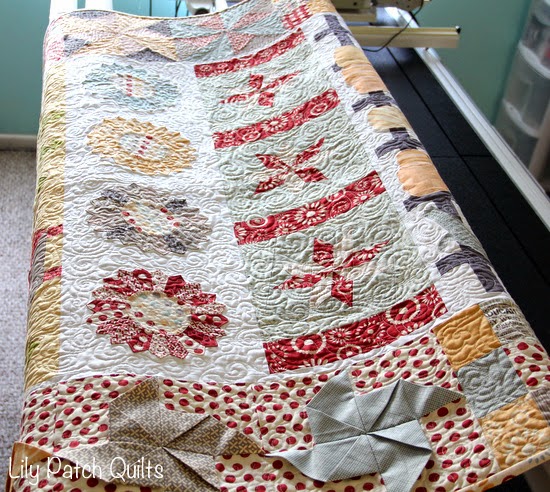 I am just practicing lots and lots of swirls lately. I did circles and stippling on the dresden plates. 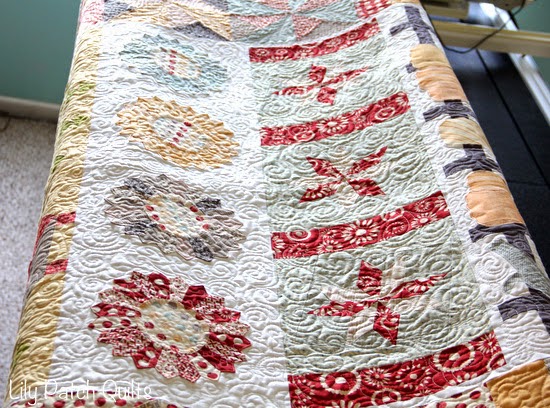 The double pinwheels on the left side I added some feathers and the corners I echoed the flowers all over it. 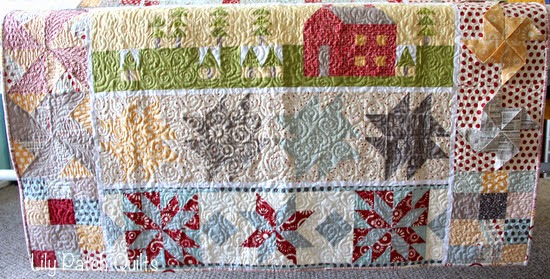 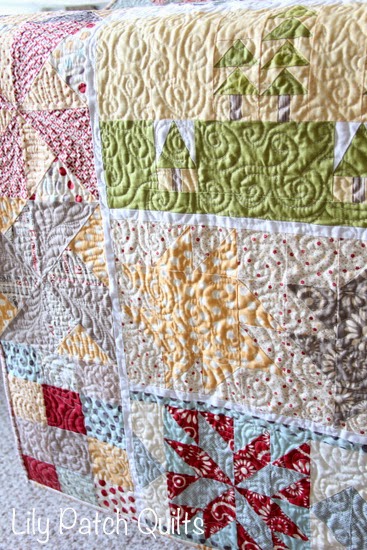 This row was supposed to be a Christmas theme but I didn't want that. This pattern was really confusing. I made so many cutting mistakes that I finally had to break it down by sections and pieced and cut as I go. It took a while but I love how it turned out. 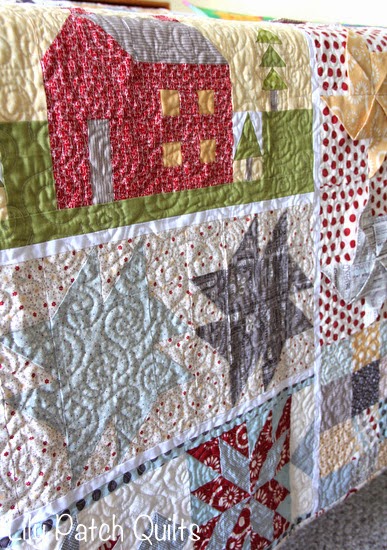 These are some more close-up shots 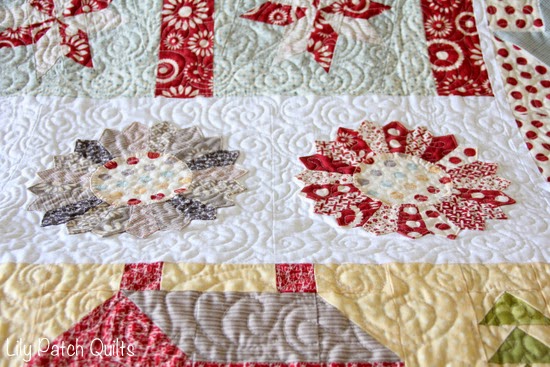 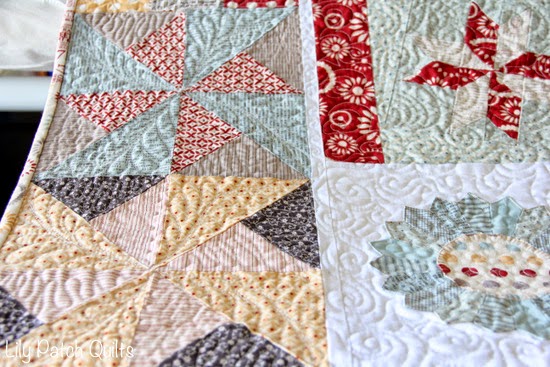 My poor quilt has been folded so many times that it finally formed fold lines. This is what the back looks like. I did some outlining around the pumpkins on the first row. 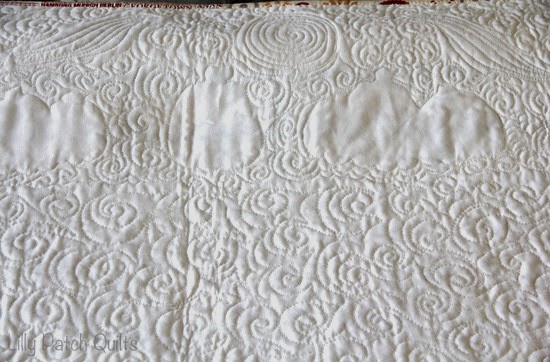 One of the requirements of the Row By Row Experience was that a label had to be added. In order to break up the white I added a row of squares and fit in the label close to the center so it gets worked in with the quilting so it can't get taken out.
It's not too late to join the in the fun. Click here for more info.
BTW...DD loves this quilt so much that she says she's going to steal it when she moves out :-) 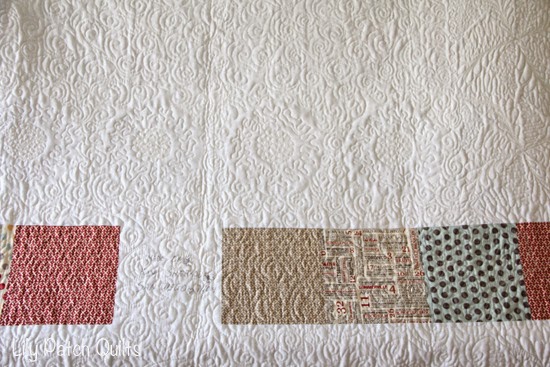 I am linking up with:

This is just gorgeous and your quilting on it is amazing! Love the pinwheels!

I love your quilt and the quilting is fantastic!

Beautiful work! I love the colour scheme and there is just so much to look at that is interesting!

Congrats / this is just stunning! :)

I absolutely LOVE your choice of colors. Your free motion quilting looks great. The 3D pinwheels are a great added attraction. Thank you for sharing this lovely piece of art!

It's beautiful Kim - well done. Love all that quilting. xx

That's beautiful! I love your quilting!