I took our girls to our LQS about two months ago and our 14 yr. old picked out a couple of animal patterns she wanted to try and make. One of them was Mrs. Perkins from Melly & Me. She doesn't have much time when she's in school so over Christmas break I asked DD to choose fabrics she would like to make Mrs. Perkins with and she chose blue and grey kona cotton solids. I opened the pattern and there were no photos/illustrations. It was all written instructions. I am a visual learner, step-by-step photos are really helpful to me. I read the instructions and it wasn't clicking. First it called for 16" and 4" fabrics. To me it was like well, is it 16" and 4" square or a whole strip? I had to read and re-read the pattern before it finally clicked. Once I got the instructions down, it wasn't so bad. I made the templates for her then she did the cutting and sewing. Those horns are so small, I had a hard time turning them right side out. DD then decided that she doesn't like the eyes on the pattern and asked for buttons. I took a trip to Joann's to pick out the buttons and bought gray embroidery thread so she can finish Mrs. Perkins. I think she did a SUPER job with her first stuffy. Mrs. Perkins is adorable. 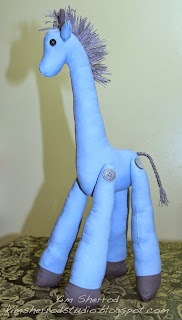 Now that we've made one giraffe, if she would like to make more it will be a breeze. Cute pattern. Next up will be Dilbert the dinosaur. We probably won't be able to make it for a little while unless DD is not swamped with schoolwork.
The Hexagon giveaway is still going on until Friday. Scroll to the next post to enter.
Posted by Kim at 5:00 AM

Oh my gosh! I have honestly been wondering for years if they had rewritten that pattern (I think it was one of their first). I guess I got my answer with your post. I love it, and once you figure it out, it is quite simple, but it is different. I wonder if you ended up doing it the same way I do...

This is so darling! Great job!!!