A while back I worked on my Thimbleberries Snowflake table runner but wasn't sure if I wanted to add the snowflakes. Now I think it should be on the table runner. 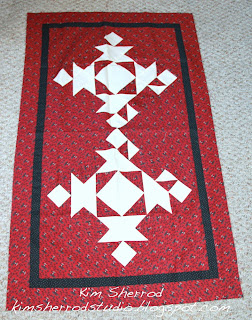 I went to Joann's to pick up some fusible webb. I pinned the template to the fabric and cut them all out. That was a mistake. I haven't applique in a while so I really wasn't thinking. I should have place the fabric onto the fusible webb, trace the template then cut it out. It would have saved me some extra cutting time. 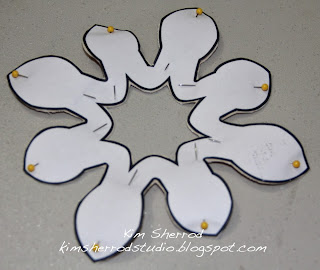 Here they are, all cut out. Now I've got to put them onto the fusible webb and cut again. 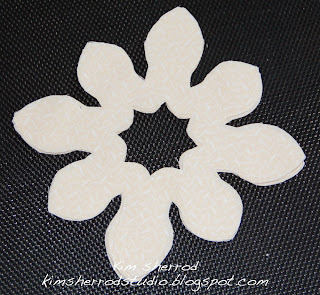 I have appliqued the snowflakes onto the table runner and it is quite late. I'll take a picture after I get home later in the morning and post.
Posted by Kim at 1:35 AM

Pretty, but I thinka couple of the triangles on the right hand side might be wrong?

Ohh Kim, it is going to be beautiful! Thanks for sewing with me!! Have a happy day!

I was looking at this trying to figure out those odd triangles. I think the pattern is wrong because someone else has the same triangles flipped wrong like that with their table runner. I hope you will be able to fix yours before doing your applique. It is a pretty runner.